The world has known war almost as long as man has existed. War has always been violent and has resulted in the death of many men and women. Fortunately, not everyone involved in a war dies, but there are many, many war wounded. This dimension of the war wounded soldier really came to the fore after the Second World War and the definition of a legal status.

It was the First World War that revealed the extent of the human losses and injuries caused by an armed conflict. According to a study conducted on the occasion of the centenary of the end of the Great War, 20 million wounded were counted at the end of the conflict, most of whom had to suffer for the rest of their lives from these serious injuries. Among the 8 million soldiers mobilized for the Great War, there were 2.8 million surviving wounded. Many of them were subject to irreversible effects; there were more than 300,000 mutilated, about 200,000 war invalids, but also cripples, blind people, gassed people, traumatized people and cripples.

Following this war, the term "gueules cassées" (broken heads) also appeared. This expression was coined by Colonel Yves Picot, who was the first president of the Union of Head and Face Wounded, who was also wounded in the face by a shell explosion during his assault on the plains of Corbery on 15 January 1917. It is estimated that, following the conflict, there were between 10,000 and 15,000 broken faces.

These seriously wounded people made the population aware of the ravages of war, beyond the deaths it left behind. The Austro-Hungarian writer Joseph Roth, who was very sensitive to these striking images, described all these wounded as "Living monuments to the dead".

The reasons for the wounds

In the context of the Great War mentioned above, artillery was responsible for approximately 70 to 80% of war injuries. But the causes are very diverse, all the more so as armaments have evolved enormously, becoming more and more effective and, in essence, violent. The war wounded in a general way are called WIA for Wounded in Action in English. This denomination groups together three types of wounded:

- The "cripples", who have suffered light wounds and who are redeployed in their unit following a layoff of less than 72 hours. They are known in English as RTDs, which means return to duty in French.

- Surviving wounded who are evacuated from the field

- The most seriously injured who will not survive the effects of their injuries, despite an attempt to be treated once repatriated to an established medical facility. They are classified as DOW, meaning Died of Wound.

Lesion agents are the denomination given to weapons or types of war injuries that cause lesions in order to classify and categorize them. They are highlighted because they represent the major part of the injuries recorded during the conflict. This can be illustrated by referring to the injuries sustained by American servicemen in the three major conflicts of the 20th century: the Second World War, the Korean War and the Vietnam War. Over the course of these three conflicts, penetrating trauma, i.e. these so-called injuries, represent between 85 and 93% of the injuries identified, depending on the conflict. The rest of the identified injuries are divided between burns, blast injuries, closed trauma and others.

Blast, a component little known to the general public, is a blast effect due to explosions, associated with a thermal phenomenon. This blast creates a supersonic shock wave. This will compress the gas which can be stored in the human body, then redilate it, all this in a very fast and brief way. This double violent change of place taken by the gas will have the effect of destroying the interior of the victim's body, causing tearing and other shearing which will damage the tissues and organs more or less seriously, depending on the power of the wave. The shock is sometimes so violent that it can create osteopathic lesions, often diagnosed last because of the concentration given to the more urgent organic diagnosis.

Beyond these classifications, it is important to understand which type of weaponry is most devastating. Weapons can be divided into two broad categories: explosives and other agents. The reason explosives are categorized against other types of weaponry is because they are the main cause of injury and casualties. Whatever the conflict, they are the majority. In fact, both during Operation Iraqi Freedom (2003-2004) and during the French engagement in Afghanistan for 13 years, explosives represent more than 60% of the injuries in both cases. One explosive agent is still predominant in the impact it had in both conflicts and more globally in most current theaters of operation: IEDs. This acronym stands for Improvised Explosive Device. In the Iraq war, IEDs were the cause of 30% of injuries, and in the Afghan conflict on the French side, this figure climbs to 47.5% of injuries. Other injuries, mostly from firearm ammunition, are much less numerous than those from explosives, thanks in particular to the necessary precision and the improvement of protective equipment, including the permanent obligation to wear a helmet. The injuries that remain from this source are often less serious because they affect the limbs and extremities, less often the trunk or head, which are better protected.

One of the main problems encountered when treating a war wounded person is the frequent multiplicity of injuries. Indeed, because of the bursts of fire, explosive debris and fragments, most of the wounded are riddled. This statistically makes the victim's condition much worse than if only one wound resulted. For example, military personnel who died in the Vietnam War had an average of 3.2 wounds on their bodies, the reason for death.

Prohibitions to limit the human toll of war

Following the establishment of the Geneva Convention in 1864, international human rights were created, also called the law of armed conflict. Its objective is to limit the human toll and the violence used during certain conflicts. They have evolved in proportion to the scientific progress made in armaments and in reaction to the main devastating conflicts of the 20th century, such as the 1949 convention, given following the atrocities of the Second World War. The armaments that are globally prohibited by these conventions are all non-discriminatory armaments. It is understood by non-discriminating weapon any weapon which during its use could not avoid a direct or indirect impact on the civilian population and the civilian infrastructures. The HDI also rules to prohibit weapons whose violence is considered to be beyond comprehension, i.e. of too great a violence. There are five categories of weapons that have been condemned by the International Human Rights:

- Cluster bombs: these are weapons which, when exploded, release numerous "submunitions or fragments", sometimes over perimeters of more than a hundred meters, thus making no discrimination between military or civilian targets. Beyond the fact that, according to the NGOs, more than 98% of them injure civilians, a good part (up to 40%) do not explode and are transformed into anti-personnel mines, a danger in the long term because it is so difficult to foresee them and to find them. The treaty that prohibits it is called the Oslo Treaty, voted in 2008 in Dublin, entered into force in 2010.

- Anti-personnel mines: these are explosive systems that explode when they detect the presence of a person, whatever it is. It often works either by pressure or rupture of a link holder. Widely used, almost undetectable, it is impossible to know how many of them are still in place in current or abandoned theaters of operation, which makes travel uncertain and dangerous. Their prohibition and destruction dates back to 1997, but still 56 countries have defined zones of potential presence.

- Nuclear weapons: rightly described as inhumane and indiscriminate weapons, nuclear weapons have been banned since 2017 by the United Nations. Beyond the impressive impact, radioactive fallout is a human catastrophe.

- Chemical weapons: characteristic of the two great European wars, their only objective is to cause physical damage or death. They have been banned since the 1997 convention.

- Robot-killers and autonomous weapons: they are being studied and are not yet prohibited, but their very essence would be called into question by the representatives of the United Nations and the Red Cross, who are asking for a convention to be set up and voted on in order to prohibit them.

Despite this framework and prohibitions, there are some conflict areas where they are still used, being very difficult to verify or not the continuity of their production sometimes secret and covered by some rebel states. This was the case in 2016 when Sudan was identified as using chemical weapons.

The current Ukrainian conflict and its casualties

Ukraine has become the theater of operations of a conflict opposing it to Russia. It is a violent armed conflict that sees the use of sophisticated and devastating weaponry so well used, it is logical that the human toll suffers. It is still very difficult to determine the exact figures, given the lack of communication on the part of the parties involved, with the aim of not informing the opposing camp. It is therefore necessary to seek information from outside organizations or actors who are trying to analyze the conflict and its repercussions. For example, according to the American Chief of Staff, General Mark Milley, he estimates the combined losses of both sides at more than 100,000 dead and wounded. As in most wars, the wounded end up being amputated, and the Ukrainian conflict is no exception. The World conducted an interview in August 2023 with the Bez Ozmezhen rehabilitation center on the outskirts of Kiev. Since the beginning of the conflict, more than fifty already amputated soldiers have come to the center. In spite of the lack of numbers, it is essential that the organizations involved in the care and representation of the war wounded get ready to accompany these wounded. This is the case of France, which since May 20, has already repatriated several Ukrainian war wounded to France in order to provide them with the necessary surgical care and rehabilitation.

The aftermath of the injury

Although the apparent after-effects are the visible ones, it is important not to underestimate the psychological impact that accompanies the injuries. Most of them are violent and irreversibly modify the body and the victim's daily life. It is therefore necessary to provide comprehensive support and follow-up following these injuries.

The injured person can benefit from the status of disabled person when returning to civilian life. This only concerns injured people whose injuries have had a drastic impact on their daily life. According to the law, if the disability is recognized as a result of the injury, war invalid pensioners receive access to certain special rights such as priority access to care and rehabilitation, priority access to civilian transportation and other financial aid.

In France, there are various organizations that represent and follow war wounded throughout their lives: the Federation of War Amputees of France, the Association of War Amutilated Eyes, the Union of Face and Head Wounded founded by Yves Picot, presented earlier, the André Maginot National Federation and the Foundation of War Cripples and Invalids. There are 8 military hospitals in metropolitan France as well as the National Institute of the Invalids that take care of war wounded.

The DPA Med and the war wounded

The DPA Med is a medical device that rehabilitates back pathologies, walking and balance disorders. It can be integrated into the rehabilitation protocols of the lower limbs. Thanks to a reproduction of the movement of walking at the level of the pelvis, the device will allow an osteoarticular mobilization of the lumbopelvis-femoral complex. The objective is to first relax and then strengthen the fixators of the hips, pelvis and spine, by reworking their mobility and proprioception. The prostheses are kept on during the active and passive work in order to work on balance. Wounded wounded are often concerned with the following work on return to walking after poly trauma or amputation, which is an applicable DPA Med protocol. 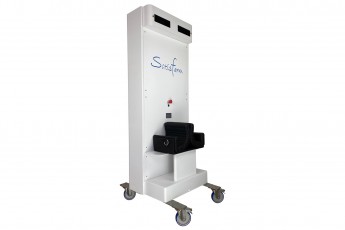 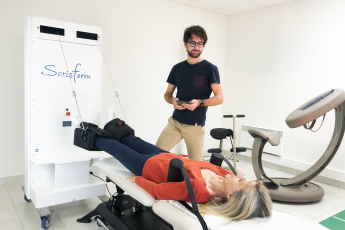